Measuring the rate of the Cranial Rhythmic Impulse

Is there a reliable reference rate of the CRI for clinical, research and teaching purposes?

The term ‘Cranial Rhythmic Impulse’ (CRI) is used to describe a slow pulsatile movement phenomena that the whole body exhibits, involving a flexion and extension of midline structures with an external and internal rotation of paired peripheral structures. The purpose of this study is not to confirm, deny or debate the existence of the CRI, but to present and analyse the published material regarding its speed or rate.

CRI is a term coined by Dr’s John and Rachel Woods in 1961 to describe the phenomena of movement that the Primary Respiratory Mechanism produced in W.G.Sutherland’s model of rhythmic whole-body motion. It is thought that the CRI is not the complete and only functional consequence of the PRM, but that it is a physical (as opposed to chemical or electromagnetic) manifestation involving pressure and motion variables. The exact etiology of the CRI remains unclear from a reading of the literature.

The CRI numerical values used by each author or researcher to describe the rate of the cranial rhythm vary too widely to be accepted as accurately describing the same thing in the same way.

The Rate of the cranial rhythm should be the simplest to describe of the cranial rhythm attributes and concepts used in clinical practice. If movement can be reliably detected, it is a simple matter to relate that information per unit of time.
Objectively measuring the Amplitude of CRI movement (how much range from complete flexion to complete extension in each cycle of palpable motion) would be more difficult.
Likewise, measuring for Symmetry of motion between one location of palpation and another (such as comparing leg rotations to gauge pelvis mobility, or comparing left temporal and right temporal bone motion) involves more complex measurement issues.

An accepted norm has not yet emerged from research, the way it has for other biologic rhythms such as the rate of the hearbeat or breathing.
While such a basic element in understanding the cranial rhythm remains contentious, more complex research is blocked, hindering the development and acceptance of this remarkable health science and therapy approach that is still outside of the medical mainstream, over a hundred years after it was pioneered in a practical way by William Sutherland.

This article will briefly survey differences and discrepancies with a view to clarifying the rate of the CRI. “Learn to carefully scrutinize the information about the cranial field, and the cerebrospinal fluid in particular, so as to criticize scientifically. Do not base your thinking on matters that have been passed down through the ages without critical scrutiny.” (Sutherland)

Published references to the rate of the CRI have been tabulated for ease of comprehension. See Table 1. 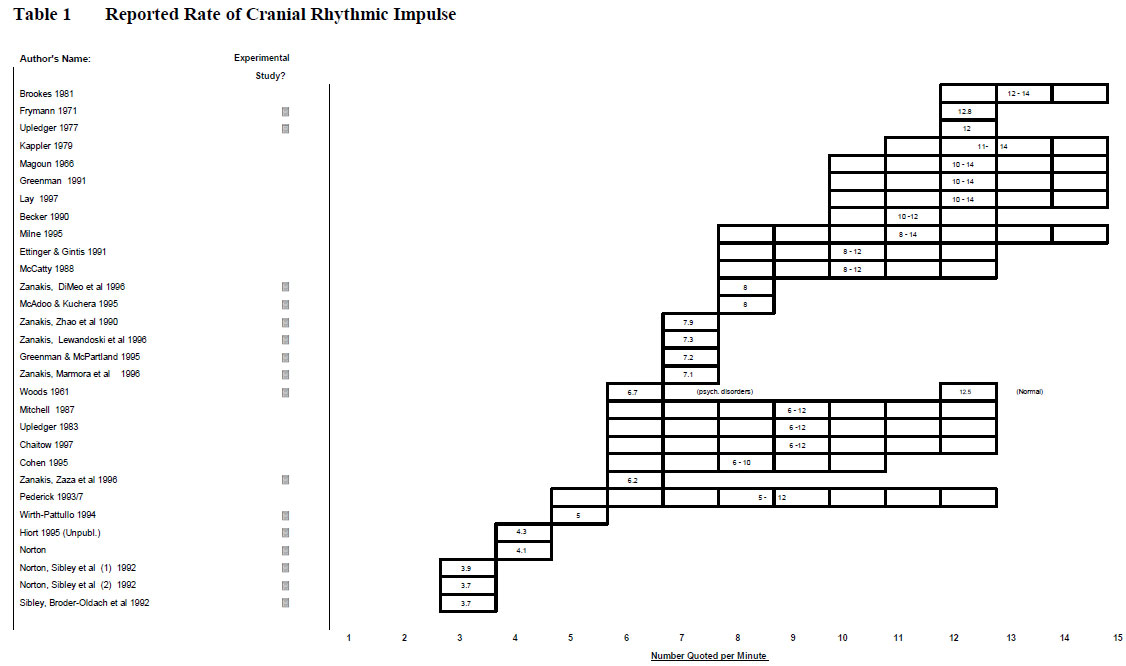 Where these rates are based on experimental studies, various parameters have been presented for comparison. See Table 2.

An examination of these tables shows great variability in the types of study, the methods used and the results obtained. “There exists a wide range of disagreement amongst experts as to what is and what is not normal regarding rates of pulsation.” (Chaitow)

Previous research studies have numerically defined the normal rate of the Cranial Rhythmic Impulse. This review of the literature has sought to identify, tabulate and deduce that this range of values is great, to the point of serious doubt about validity, if the same phenomena, measured in the same way, is authentically described by each study cited. Put another way, the vital question is: does an experimental study that measures a mean CRI rate of less than 4 c.p.m. accurately refer to the same phenomena as that which another author contends is 14 c.p.m.?

Information relevant to this phenomena comes from the major source of clinically based osteopathic research and from a variety of minor sources in the biological and diagnostic sciences that have historically worked in parallel, not in tandem.

In theory, the phenomena of the CRI is of relevance to many specialised disciplines, such as the diagnostic sciences, anatomy, neuroscience, opthalmology, ear, nose and throat specialities, rehabilitation, psychiatry and counselling as well as to a popular awareness of this concept.

In practice, it is body-oriented therapists who have the hand skills and the time to implement the appropriate methods. At present the phenomena of the CRI is largely unknown outside of a few specialised professions.

“Its diagnostic possibilities have never been fully explored.” (Magoun) “Beyond the clinical interest of disorders such as hydrocephalus, knowledge of the rate and pathways of circulation, of the absorption and mode of origin of the fluid is needed for intelligent therapeutic measures within the central nervous system.” (Flexner)

Researchers have urged that greater attention be paid to this area for decades. Interdisciplinary research that combines the theoretical and palpatory focus of ‘Cranial Therapy’ with the appropriate diagnostic technology may resolve some of the problems involved with CRI study. Objective measurement should be a priority.

A simple and portable measurement device would enable field research

Surveying of particular populations may allow correlative data to be recorded to determine the effects of palpation, the occurrence of still points and to determine particular clinical relationships with greater certainty.

In summary, the CRI is a slow pulsatile movement phenomena, the rate of which is disputed by different authors and researchers. The use of different methodologies makes meaningful comparisons difficult. Further research that includes standardised measurement as a precondition may determine an accurate and reliable reference rate for the Cranial Rhythmic Impulse.

This article is a precis of a longer post available on this site, a 1997 academic literature review called The rate of the Cranial Rhythm that includes the references for authors cited here, a bibliography, and goes into more detail.